E-Alfa Ginseng Tonic is a great Homeopathic tonic for general physical and mental health. It helps regain physical strength and energy in people suffering from anemia, mental weakness, persistent fatigue, sleeplessness, excessive workload, competitiveness, excessive use of technology and prostration. It is a complete family tonic for all ages. It is also a great health tonic for housewives and mothers.

AKG-30 or E-Alfa Ginseng is a general health syrup that has a wide range of benefits on our body. It is a Homeopathic general health tonic not only indicated during convalescence for early and complete recovery but also may be useful in promoting good health.

Alfalfa influences nutrition by toning up the appetite and digestion resulting in improved mental and physical vigor with gain in weight. Disorders characterized by malnutrition like neurasthenia, nervousness, insomnia, nervous indigestion comes in the range. It acts as a fat producer and corrects tissue waste.

Avena sativa has a selective action on brain and the nervous system favorably influencing their nutritive function. It may be the best tonic for debility after exhausting diseases. It may be helpful in nervous exhaustion, sexual debility, alcoholism, sleeplessness, and various nervous states of many female disorders.

Lecithin has a favorable influence upon nutritive conditions, especially on blood. It increases the number of Red Corpuscles and the amount of Hemoglobin.

Cinchona is a well-known remedy for debility, weakness, and loss of appetite from exhausting discharges after violent diseases.

Ginseng is said to be a stimulant for secretory glands. It acts on the lower part of the spinal cord, and thus strengthens the functions of the lower parts of the body.

Janosia Ashoka has an extensive sphere of action of female organs.

Magnum Acentium is known to have a powerful regenerative action on all parts of the body, thus saving us from a wide range of diseases, ranging from inflammation of blood, liver, nephritis, pains, etc.

AKG-30 or E-Alfa Ginseng is an overall Homeopathic General Health tonic for whole family and for all ages.

It may help in weakness, emaciation and prostration, anaemia, debility after exhausting diseases, convalescence (recovery from illness and surgery), mental exhaustion, nervous tremors, sleeplessness, loss of appetite, and poor appetite.

Let us know what you think...

0 reviews with a 2-star rating

There are no reviews with a 2-star rating yet

Continue as a Guest

Continue as a Guest

Disclaimer: This information is for the use of Registered Medical Practitioners and not to be used for Medico-Legal purposes. Before taking medicine, please refer to precautions. 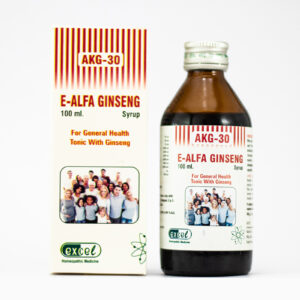